CTPS endeavours to inspire creative development and provide opportunities for members to boost their photographic skills through workshops, talks and other engagements throughout the year

It is important to acknowledge that improving one’s own level of photography can only be achieved by getting absorbed in photography from all perspectives. Hence the objective of the E&D programme at CTPS, working in conjunction with Outings, is to expose our members to a cross section of recognized photographers working with varying genres, so giving them the opportunity to experiment with their own photography in guided situations with like-minded people.

It is not about “telling” you how to get that “perfect” shot (is there such a thing?), but rather the intent is to motivate you all to read about, and astutely view, top quality photography. A prime aim is to get you to move away from being controlled by “rules and marks”, and to rather encourage you to establish your own style of capturing that magic moment which caught your eye in the first place. No internationally renowned photographers stick to the “rules”, but by fully understanding the basic principles of photography they create their own style to present outstanding images; and most of them stress the need for a creative approach supported by a passionate commitment.

The Education and Development evenings take place once a month, on the 3rd Wednesday of the month, starting at 19h00 in St Stephen’s Church hall, Pinelands. These evenings are worth attending and will take your photography to new levels! 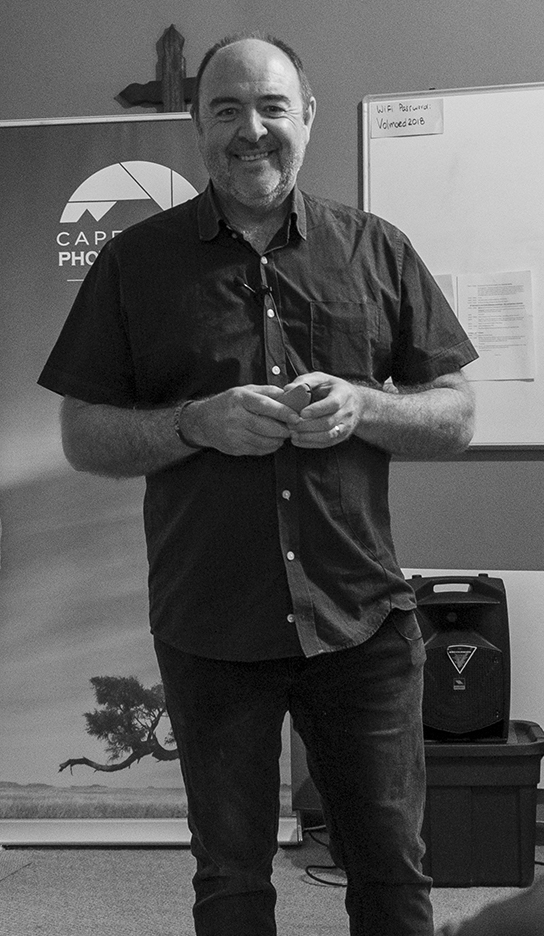 Richard Martin is a long-time contributor to Photo Life magazine and pursues photography as a medium of visual expression. He is best known for his unique vision with a personal style characterized by a strong sense of composition, colour, and the use of light. His work combines an architectural love of geometry, pattern and texture with a painter’s sensitivity to colour, light, and composition. Richard inspires participants with his photography and visual design workshops, tours, and seminars around the world.

“My photography is a celebration of the visual world. It originates straight from the heart, honest and direct. Inspired by colour, texture and light, I make photographs to express feelings surrounding my experiences, searching for visual equivalents to those feelings.”

Moving beyond literal representation, I view line and shape in a highly graphic manner, with a fascination for the dramatic effects of light and shadow on form. One of the unique properties of photography that excites me is its spontaneity, its ability to capture a transient moment. A moment of discovery becomes a moment of rediscovery when the subject is viewed through the lens. In this way photography becomes a simultaneous act of intuition, feeling and recording. The quality of light plays an important role in my image making, with its capacity to transform the commonplace into the poetic and render the real as mystical and surreal.

My approach to photography is simple. I value the unexpected and remain open to new ideas and exploring new directions. The process of making photographs and afterwards translating the image to print has always been an act of transformation from the literal to the imagined, and from the seen to the felt.

The biggest challenge when including people as an element in our compositions is to clearly reveal that hidden, intangible ‘element’ that lies beneath.  This involves having compassion and understanding for your subject. The practice is a combined process using instinct and technique. It’s about everything working together. The combination of elements in the frame, the surrounding context of the subject, and how they interact with their surroundings. In addition, the definitive gesture leading up to that precise moment in time when the shutter is released. Allowing for spontaneity in your image making and most importantly trusting your visual instincts.

In the beginning when I started to include people in my pictures, I discovered a body of work containing the human element portrayed with anonymity—silhouettes of people, faces hidden by shadow or their inclusion at a small scale in relation to the picture space. Situations are constantly changing in this type of photography. There is often one instant when all the elements come together in every respect to form a successful image. Chance or good fortune may play a role in capturing that critical moment, but typically it is a matter of passion, sensitivity, and quick reaction. This involves being alert and connected; it’s about being in the moment and not preoccupied with the past or the future. In other words, letting the photograph happen without trying to control it.

I have loved photography ever since purchasing my first ’real’ camera in 2010 – it quickly became an all-consuming passion, occupying large amounts of my daily thoughts. The camera leads me to places I otherwise would probably never see, such as Iceland. Without my love of photography, I doubt I would ever have explored Iceland – and even if I had I highly doubt I would have been up at 3am to capture the sunrise!

It was after ten months based in Melbourne, Australia and I was about to travel to the bright lights of Hong Kong that I visited a small camera store and purchased a Panasonic Lumix LX3. Just three weeks later I was standing in the dark on a bridge in Hong Kong, capturing the light trail shots that I had dreamt of just a few days earlier.

After four years shooting a variety of genres such as weddings and events I stumbled across architecture photography in late 2013, and I have been shooting inside abandoned spaces and buildings ever since.

In 2014 I began shooting my first abandoned building series ‘Decadence’, and six years on I have now built up a large portfolio taken in some of the most striking locations in Europe and beyond. My primary focus is capturing rich colour palettes and straight lines in the camera, then utilising modern post-processing techniques to develop each completed image.

During 2015 I signed a deal to work with my current art agency Goodman & Co, based in the Netherlands. They sell large format plexi-glass pieces of my artwork to galleries across Europe. I have also hosted two large exhibitions here in my home city of Norwich, including being invited to exhibit at the prestigious ‘Art Fair East’ trade show.

My work has been shortlisted in several international competitions, most recently a category winner for Architecture in both the Chromatic colour awards and the ND Awards 2017, and in March 2018 I was runner up in the Architecture category of the International Photography of the Year competition.

I have been a Pro Partner for Benro and an ambassador for Tenba bags since February 2017 as well as holding an affiliation with 5.11 Tactical, who help me out with luggage bags and clothing.

As you will see from my portfolio, travel plays a huge part in my image-making. I visited nine countries in 2017 alone, and close to twenty since my journey into architectural photography began. I have always been fascinated by different cultures, foods, textures and colours. It is this love for travel, combined with my deep passion for photography, that keeps me motivated and dedicated to putting in the long lonely hours of research and logistical planning to then get out with the camera time and time again.

I hail from the fine city of Norwich in the United Kingdom, having spent the best part of thirty years growing up there it was a place I always returned to after travelling. Since January 2019 I have taken to the road full-time to undertake a nomadic lifestyle with my girlfriend Jade as we strive to grow a better photography and adventure tour business.